As a child, my first contact with music was through playing the flute. Oh boy, how much did I dislike this instrument and its sounds! Later on in my teenage years, I thought it would be cool to learn the guitar. Eventually I got a guitar, and my parents bought me a self-learning course on CD. I gave up almost immediately, and that marked the start of an almost 30 years hiatus.

Last year with the pandemic hitting, I found myself yearning to learn something new. Coincidentally I got a Cajon and started to play with it, but again the experience was frustrating. Besides, my music interests mostly revolved around electronic music. I decided to get myself a Teenage Engineering PO33 – a very small synthesiser in the form of a calculator.

Not only did this bring me back to my days of learning programming due to the form factor of the device(I started coding on a HP48GX!), but I also realised that making music does not have to be performance-based –  it could also be programmatic and based on repeatable sequences.

I was hooked; it got me wanting more! I got myself an OP-Z, an amazing small synthesiser with a lot of capabilities which opened me up to a whole new world. On top of making music, trying to understand this new universe with its jargon, technical terms and different kinds of existing devices has got me craving for more during this last year. I went on to start an Instagram account (@elemental_ist) to share a few tracks. I downloaded Ableton, a DAW (Digital Audio Workstation), but the experience with it only led to more frustration than results.

I decided to follow all musicians who did not use a DAW and quickly stepped into the analog world.

My first step with analog gear was with a Moog Subharmonicon. I spent days and nights doing sound design, learning how the instrument functions, but that was only scratching the surface. While losing myself in creating sounds and learning more about other synthesisers I want to acquire, I started to struggle with my workflow, and literally stopped publishing any music until recently. I bought more instruments, thinking that with the next one, I’ll produce a great track, only to find myself doing more sound design and buying more equipment. Each new instrument, while adding new possibilities, also increased the level of complexity to my setup significantly.

Even though I was having a lot of fun building a great setup and spending a lot of time exploring its possibilities, I hit a wall when it came to actually producing something.

And I want it badly enough.

One day a founder I was mentoring mentioned that her husband, Jorge, is a musician and producer, and maybe we should talk.

Jorge took me under his wings and started to mentoring me, including answering every stupid question, It forced me to reevaluate Ableton so Jorge could transfer his knowledge to me over video calls. I really liked Jorge from the get-go – thanks to his no-bullshit attitude, his directness, and sense of humour. On top of that, Jorge is a fantastic artist and his style immediately clicked with me.

I had gotten used to being the one who gives advice to others, so putting myself in the role of a mentee who did not really know much about anything had been a humbling experience. Impostor syndrome was real – and I did not understand why an actual musician would spend some of his free time teaching me the most basic things.

I started to learn more about mastering, mixing and using the computer to assemble things together. More possibilities. I also started to discover more artists through playlists I’d exchange with Jorge. He’d push me to send him tracks of what I do. For a long time his comments would be: not bad, but I know you can do better. I was still seeing a lot of brick walls in front of me, from music theories to even the types of music I wanted to produce. I started to listen to and fell in love with musicians I’d never heard of before like Alessandro Cortini.I listened to his tracks over and over again to understand how they are structured, and what kind of instrument he was using.

I am on a slow path to discover my own style, slowly.

Geeking out on the Beauty of Instruments

While learning Ableton has been a rewarding experience when it comes to the new possibilities it offers, my heart lies with actual instruments, particularly analog gear. There is something almost magical about patching synthetizers together with cables. (Semi-) Modular synthetizers generally expose what’s called a “patch 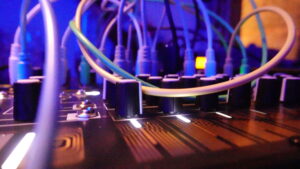 bay”, which lets you rewire the internal signal path, but also allows to connect with other instruments.

It’s a bit like an instrument exposing an API. The data format here is simply control voltage (ranging generally from -10v to +10v), and the wiring happens with actual…cables. Everything is standardized to what’s called the “Eurorack” format, which specifies the size of the module, how they are powered and how they exchange signals.

Music feels a lot like hacking in a certain way. I love the intellectual and technical challenges of it, as much as the purely artistic aspects.

Making music is now part of my life. I won’t go to sleep before playing for at least an hour with my instruments. It soothes me, and creates a sense of calmness in me. Sometimes it’s even exhilarating.

I’ve learned a lot about the creative process, especially how you’d sometimes get stuck and then you’d stumble upon something interesting in the very next second. Making music is a beautiful journey and I’m so glad that I took the leap. I’m lucky to have friends with whom I can share my passion with and it keeps me going. It’s still early beginnings for me and I’m still shy of the idea of releasing tracks, but at least I now know this is part of the journey.

Coming back to the impostor syndrome I mentioned earlier, I actually asked Jorge: why are you spending all this time on me? He said that he saw a spark in me, and that he believes something beautiful will come out of that.

True friends and close ones would always encourage you to do something despite what they really think of it, so when someone external sees something in you and actually helps you to get there, it is truly powerful. They sometimes turn out to be the ones who really believe in you and help you discover what you’re capable of.

I’m forever grateful to Jorge, and to everyone who’s been supporting me on this journey.

To celebrate this, here is my latest track!

This site uses Akismet to reduce spam. Learn how your comment data is processed.